In Red Square in Moscow (Arch. A.V.Shchusev) is the tomb of V.I.Lenin, and is one of the masterpieces of the Soviet architechture. The first (temporary, wooden) building was opened January 27 1924, near the Senate Tower of the Kremlin in Red Square. This building was a truncated step-like pyramid with two L-like structures with staircases adjoining it at two sides. Visitors descended the right staircase, moved along the three sides of the sarcophagus and exited by the left staircase. Two months later the temporary wooden Mausoleum was closed, and the construction of the new wooden Mausoleum began and lasted March through August 1924. The new Mausoleum was a large (9m high and 18m long) truncated step-like pyramid, now the staircases were incorporated into the general volume of the building.

To ensure longevity of the wooden elements, they were treated with oil varnish, and as the result, the color of the building was strict light brown. The tension bars, doors and columns of the top portico were of black oak. The wooden siding was fastened with forged nails having large figured heads. Five years later, the construction of the stone Mausoleum began (July 1929 – October 1930). In plan, the stone Mausoleum is practically the same as the wooden building. Visitors enter the main entrance and descend the left 3m wide staircase (the walls are faced with labradorite) into the memorial hall. The hall is cubic in form (face length is 10m) with a step-like ceiling.

A wide black labradorite band with red porphyritic pilasters on it runs round the periphery of the hall. To the right of the pilasters run the bands of black polished labradorite, with zigzag bright red smalta strips between them. Visitors move along the low podium around the sarcophagus from the three sides, exit the memorial hall, ascend the right staircase and exit the Mausoleum through the door in the right wall. Constructively, the frame of the building is reinforced concrete; the walls are filled with brick and faced with polished marble, labradorite, porphyry, and granite. The length of the Mausoleum facade is 24m, the height 12m. The top portico is shifted to the Kremlin wall (in the wooden Mausoleum, it was shifted to the facade). The Mausoleum pyramid consists of five projections of different height (in the wooden building they were six). In 1945 a tribune for top officials was arranged on the first projection. Admission is on Tuesday, Wednesday, Thursday, and Saturday, from 10.00 a.m. till 1.00 p.m.

Heritage at Risk
Moscow. September 2005
It is a well known fact that Russian Avant-garde and Constructivism of the 1920s-early 1930s are one of the most important contributions to the early years of the International Modern Movement in architecture. But the deadline for rescuing parts of the 20th Century potential World Heritage properties located in Russia is to be passed within the next 5 years. 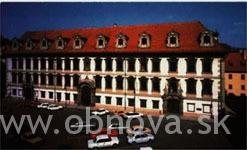 The Wallenstein Palace covers a wide area in the northern part of Mala Strana between Valdstejnske namesti, Valdstejnska and Letenska streets and Klarov. Its construction was commissioned by one of the most powerful and wealthiest Czech noblemen from the post-White Mountain era, Colonel and, from 1625, General Albrecht Vaclav Eusebius of Wallenstein (1583-1634). The palace was to be his Prague residence which, in its size and splendour, would cast a shadow over all the other buildings of its kind and even compete with Prague Castle itself. It was designed by Italian architect Andrea Spezza.

RESTORE is a national not-for-profit educational corporation which offers a range of programs and services related to the technology of building conservation. Since 1976, RESTORE has provided workshops and courses on the technology of architectural preservation to building industry professionals who are directly responsible for the preservation of our architectural heritage.